Today, Rich dives into the runoff election for the US Senate in Georgia. Then, a live update from Trump Advisor, Bruce LeVell, former Gwynett County Republican Chair and Executive Director of the National Diversity Coalition for President Trump on whether the GOP will fight for Trump. Then, a tease at what to expect at the January 6th, 2021 Save America Rally and the March for Trump in Washington DC that will occur concurrently with the counting of the electoral college votes by Vice President Mike Pence.

Portions of today’s program are brought to you by PolitiWeek.com 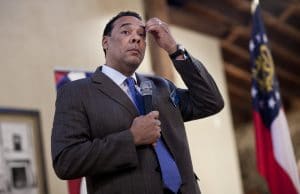 Bruce LeVell, chairman of the Gwinnett County Republican Party, conducts a party meeting on March 3, 2012 in Lawrenceville, Georgia. Voters will head to the polls to vote in the Republican primary and other elections on Super Tuesday when the greatest number of states hold primary elections with 437 delegates at stake, including Georgia's 76. AFP PHOTO/Brendan SMIALOWSKI (Photo credit should read BRENDAN SMIALOWSKI/AFP via Getty Images)